We’re proud to announce we launched the first-ever live streaming interactive Connected TV campaign for a Kellogg’s Pringles spot during this year’s Super Bowl LIII. The campaign delivered addressable creative, shoppable engagement and creative versioning at scale, so that viewers could interact with a dynamic unit that changed city name and Pringles chip flavor combo for a personalized experience. This TV spot is a premier example of how CTV creative can be made even more relevant to viewers in real-time.

This was accomplished as a result of our new partnership with CBS Interactive, enabling the delivery of highly relevant, engaging CTV ads for live events.

Kelloggs’ CMO Gail Horwood tells Adweek “This is really about making the creative work harder for the brand and seeing how we can make it more frictionless, and it’s promising for the future,” she said. “Certainly, we’ve now got metrics that we never had before, and we can use those to try and come up with a virtuous loop [to connect ad buys with sales] and then start to think about our creative in different ways.”

Check out the videos below.

The Kellogg’s Pringles spot had two versions in rotation for the big game that allowed viewers, via the CBS Sports app on Apple TV, to interact with the brand.

One creative featured a shoppable experience with a QR code linked to the Pringles online store. This was the FIRST EVER commerce-enabled streaming TV spot for the Super Bowl and the FIRST EVER interactive ad for the biggest live sporting event in the US. Viewers merely had to lift their phone up towards the screen to “connect” with the QR code and an automatic link appeared on their phones so they could continue the experience to buy their favorite Pringles flavor stacks. Early results showed that this QR code generated high engagement that led to 0.6% commerce actions taken by viewers leading to the Amazon Pringles storefront. 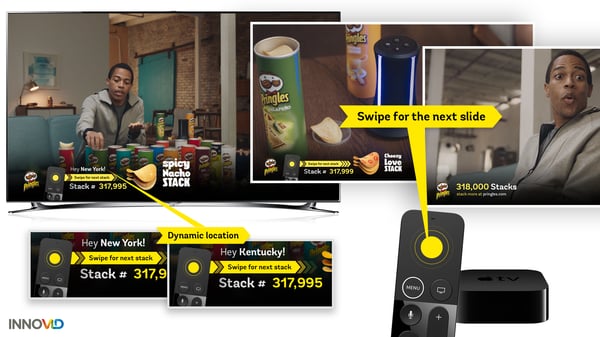 The second creative dynamically changed the city name (based on the user’s geography) and upon a user swipe, revealed more Pringles chip flavor combination for a personalized experience. Due to their unique shape, Pringles crisps are perfect for stacking, leading to 318,000 unique ‘Flavor Stacks’. This creative highlights six of those combinations and dynamically changes the city name to show those creatives through an interactive overlay during the :30 spot. There were 4,224 unique creatives delivered concurrently with dynamic creative for the city name - the largest execution of its kind.

Early results from this dynamic creative generated over 6.4% engagement (i.e.; 6.4% of households used the remote to interact with the Pringles spot). That number is over 4 times higher than the Innovid benchmark and impressive for a first-time experience over a live broadcast as large as the Super Bowl

Furthermore, the average quality of engagement was over 6 swipes per household - meaning that when a viewer saw this ad they swiped on average 6 times, discovering and uncovering this experience for themselves.

“With the full attention going into the game – knowing that CBS only gets the game every three years – it was a calculated risk to try this but was well worth it,” says Jarred Wilichinsky, VP, Video Monetization and Operations, CBSi. “We couldn’t do this 3 years ago as the technology wasn’t nearly there, nor were the viewers on streaming platforms. This is a huge turning point for the possibilities of what CTV can deliver for live streaming events, and now that we have the Innovid technology we want to replicate this to offer brands new formats that will enhance media they are already buying.”

Live programming – particularly sports – is a huge driver of viewership in linear TV, and live streaming is leading the way for the growth of CTV. With our new CBSi partnership, we are introducing innovative ways to monetize live inventory through addressable units with cost-effective creative versioning.